Most of our patients have at least two or more prostatitis symptoms. See a more detailed list with descriptions of the symptoms at the bottom of this page.

Since 1995 when the National Institutes of Health (NIH) reclassified symptoms of prostatitis into 4 categories, growing research points to the fact that infection/inflammation of the prostate gland is not the cause of symptoms men complain about who are diagnosed with prostatitis. The failure of treating what is diagnosed as prostatitis with antibiotics, alpha blockers and anti-inflammatories is old news. The vast majority of our male patients diagnosed with prostatitis have no prostate infection and no pathology of the prostate gland that can account for their symptoms. This is why treatment aimed at the prostate gland (i.e. antibiotics, alpha blockers, and anti-inflammatories) routinely fail to help them. A study we published in 2015 reported that after six months of following our treatment, one third of patients voluntarily discontinued all medication.

LISTEN TO THE PODCAST

WHY IS PROSTATITIS MISDIAGNOSED BY CONVENTIONAL MEDICINE? 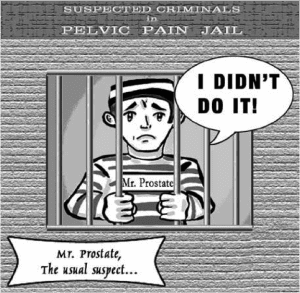 Prostatitis refers to an infection or inflammation of the prostate gland. Research over the past 30 years has documented that approximately 90-95% of what is diagnosed by well-meaning physicians as prostatitis, however, is not in fact a disease of the prostate gland. Government and prominent research studies have shown that most men diagnosed with prostatitis have no infection. Confirming the presence of infection requires a positive culture of the prostatic fluid, which although can be easily done, often is not. Indeed, one of the reasons our team is so well knowledgeable in this concept is that at Stanford University Dr. Rodney Anderson, coauthor of A Headache in the Pelvis and ran the prostatitis and pelvic pain clinic at Stanford for many years, worked closely with Dr. Thomas Stamey, co-inventor of the original test for prostatitis.

Dr. Jeannette Potts originally presented the idea of visually representing a prostate behind bars to emphasize that it has gotten a “bum rap,” and that the source of the pain with men diagnosed with prostatitis is actually not found in the infection, inflammation or pathology of the prostate gland. The problem is not in the organs of the pelvis but in the muscles of the pelvis. These muscles have gone into a state of chronic contraction usually related to years and years of stress, resulting in chronic contraction/spasm/trigger point formation of the pelvic floor. 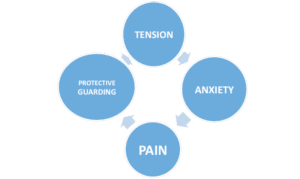 The Wise-Anderson Protocol is one of the best treatments for prostatitis because it’s a method that treats prostatitis as a kind of chronic ‘charley horse’ in the muscles in and around the pelvis. This charley horse forms a self-feeding cycle of tension-anxiety-pain-protective guarding. This cycle tends to have a life of its own when left untreated, which is why the condition becomes chronic and doesn’t naturally resolve like most other disorders.

We believe this pelvic ‘charley horse’ is related to the instinct to pull the tail between the legs that occurs in mammals. When an animal is afraid, the muscles of the pelvis tighten, pulling in the tail. While humans no longer have a tail, the pelvic muscles still tighten up in certain individuals who chronically deal with stress. This chronic contraction/spasm in the pelvic floor can cause chronic pain from the area above the pubic bone, through the penis, testicles, perineum, anus, tailbone and low back. This chronic contraction can result in problems with urination, defecation, ejaculation, sitting, and other basic day-to-day functions.

PROSTATITIS IS BOTH A LOCAL AND SYSTEMIC DISORDER

Pelvic pain relief from prostatitis, with its often bewildering and troubling symptoms, is what those seeking help from any treatment are looking for when they go to a doctor. Conventional medical treatment, however, almost universally misunderstands prostatitis. The prostatitis remedies it offers at best are partial and short-termed and at worst, remedies like surgical intervention or certain injections, can exacerbate the problem.

The fundamental error of conventional treatment for prostatitis is that it does not grasp the fact that it is both a systemic and local problem — systemic in that the nervous system, typically frequently aroused, chronically tightens up the pelvic muscles. It is a local problem in that chronic worry, anxiety and nervous arousal in certain individuals results in the local pain and dysfunction of the pelvic muscles. Without effectively treating both aspects, prostatitis remains.

Our best treatment for prostatitis is a our 6-day clinic, offered throughout the year, is devoted to resolving both the local and systemic dimensions of prostatitis by training our patients in the most advanced internal and external physical therapy self-treatment (local treatment), and practicing our relaxation protocol, Extended Paradoxical Relaxation, which is aimed at reducing nervous system arousal daily.

Most of the men we see who have been diagnosed with prostatitis are type A personality, successful, intelligent, ambitious and responsible. It is news to even the most educated men that symptoms of prostatitis outlined above is typically stress related and can be caused by the chronic contraction and spasm of the muscles of the pelvis, rather than pathology of the prostate gland. At Stanford, our team pioneered a treatment whose safety and effectiveness is documented in studies and published in medical journals. This new understanding of the cause and treatment of the symptoms of prostatitis is detailed in the 6th edition of our book, A Headache in the Pelvis.

We began publishing our results documenting the improvement of symptoms of men diagnosed with prostatitis in 2005, followed by publications in 2006, 2008, 2009, 2010, 2011 and in 2015. We confirmed in our 2009 research study published in The Journal of Urology that many symptoms listed above are recreated upon palpation of specific painful trigger points (taut, painful bands of muscle tissue) often occurring in chronically tight muscles inside and outside the pelvis. Over the years, we have found that when sensitivity/pain of pelvic floor trigger points are reduced or eliminated, and the nervous arousal triggering them is reduced, symptoms and pain reduction almost always occurred in the majority of our patients. In our 2011 Study in the Clinical Journal of Pain, and in our research submitted to the FDA for the approval of our Internal Trigger Point Wand, we documented that sensitivity and pain of the pelvic floor trigger points, as well as overall symptoms on a scale of 1-10 reduced from 7.5 to 4 over a period of 6 months. In our experience it takes time for the lifelong habit of tightening the pelvis to significantly reduce. Training our patients in releasing pelvic floor trigger points and myofascial restriction themselves, as well as lowering their related nervous system arousal, is the aim of our 6-day clinics and is why it’s the best treatment for prostatitis.

We began treating varieties of pelvic floor dysfunctions in patients at Stanford University in 1995 in conventional office visits. In 2003, we reorganized our treatment in a private practice in the form of a 6-day immersion clinic held in Santa Rosa, California. The clinic, limited to 14 patients and offered throughout the year, has evolved to implement the Wise-Anderson Protocol, a treatment to teach patients to rehabilitate the chronically contracted muscles of the pelvic floor and to reduce anxiety daily. The Wise-Anderson Protocol, done daily at home by patients we have trained in self-treatment, has helped to give many their lives back. The purpose of our self-treatment is to help patients become free from having to seek additional professional help. For over a decade, research has documented our results of training patients with self-treatment.

For questions about cost and eligibility please fill out the form below, email us at [email protected] or contact our office at +1 (707) 874-2225.

For the first time, the Wise-Anderson Protocol can be done at home for qualified persons without attending an immersion clinic.