Most of our patients have at least two or more interstitial cystitis symptoms for which they are seeking pelvic pain relief. See a more detailed list with descriptions of the symptoms at the bottom of this page.

An estimated 700,000-4,000,000 people in the U.S. (about 90% of whom are women) are diagnosed with interstitial cystitis (IC), a diagnosis traditionally referring to bladder inflammation and/or ulceration in which the bladder’s capacity to hold urine is reduced. We have found that the conditions of many patients diagnosed with IC significantly improve upon implementing the Wise-Anderson Protocol, a treatment for pelvic pain relief.

Interstitial cystitis is a diagnosis that is controversial for a number of doctors. In our own practice we have found that in many of our patients who have been diagnosed with IC, their symptoms have significantly improved without dealing with the bladder at all. More than a few of our patients have been diagnosed without any investigation of their bladder and with testing that is controversial.

Among the most effective treatments for interstitial cystitis is pelvic floor physical therapy. In the Journal of Urology, Volume 182, Issue 2, August 2009, Pages 570–580, the Mary Pat Fitzgeral and Rodney Anderson state:

There were 23 (49%) men and 24 (51%) women randomized during a 6-month period. Of the patients 24 (51%) were randomized to global therapeutic massage, 23 (49%) to myofascial physical therapy and 44 (94%) completed the study. Therapist adherence to the treatment protocols was excellent. The global response assessment response rate of 57% in the myofascial physical therapy group was significantly higher than the rate of 21% in the global therapeutic massage treatment group (p = 0.03).

Conclusions: We judged the feasibility of conducting a full-scale trial of physical therapy methods and the preliminary findings of a beneficial effect of myofascial physical therapy warrants further study.

INTERSTITIAL CYSTITIS MAY BE CONFUSED WITH PELVIC FLOOR DYSFUNCTION

Interstitial cystitis, when it does exist, may in fact be pelvic floor dysfunction. We have often found that many patients diagnosed with IC significantly improve using our protocol. While we have not studied patients with the diagnosis of IC specifically, we know that anxiety and emotional arousal is a central feature of patients diagnosed with IC and we believe our protocol that focuses on lowering nervous system arousal may be a of central benefit to these patients.

Hanno discusses the issue of anxiety and mental health comorbidity issues in his article, Painful Bladder Syndrome/Interstitial Cystitis and Related Disorder in elsevierhealth.co.uk 2007;
“There is an associated high incidence of comorbidity including depression, chronic pain and anxiety and overall mental health (Michael et al 2000: Rothrock et al 2002: Hanno, Baranowski, Fall et al 2005)”
Some researchers hypothesize bladder inflammation may occur as the result of neurogenic inflammation in response to ongoing guarding of the pelvis muscles.

In a recent survey of 264 women with IC conducted by physicians at the University of Maryland and Johns Hopkins University, it was found that the respondents were quite precise in identifying multiple sites of pain with pain sensations described as ‘throbbing, tender, piercing or aching.’ For genital pain sites, ‘burning, stinging and sharp’ were the pain descriptions. The order ranking of the most frequently reported sites of pain were suprapubic (above the pubic bone), urethral and genital areas, followed by other non-genitourinary sites. Suprapubic and urethral pain were reported as worsening either with bladder filling or just before urination in 50% or more of the women although this symptom can also occur with non-interstitial cystitis patients. Approximately 80% of survey respondents also indicated pain worsening in these areas after consumption of certain food and drinks, as discussed below.

Cystoscopy under anesthesia with hydrodistention of the bladder has been considered the gold standard for diagnosing interstitial cystitis. This method of make a diagnosis was challenged by a significant study done by Waxman et.al. at Texas A&M (Journal of Urology, Volume 160, Issue 5, November 1998, Pages 1663–1667) found that when women who underwent tubal ligation underwent cystoscopy under anesthesia with hydrodistention, the bladders of women with no symptoms appeared no different than women diagnosed with interstitial cystitis who reported symptoms. The article stated:

Results: A total of 20 normal women with a mean age plus or minus standard deviation of 29 +/− 6 years consented to participate in this trial during laparoscopic tubal ligation. Photographs of bladder sites before and after distention with 890 +/− 140 ml. were scored as 1.4 +/− 0.3 (before distention) and 3.1 +/− 1.1 (after distention) on the scale of 1 to 5. The increase in scores following distention in normal subjects was seen to the same degree and in the same proportion as in patients with symptoms of interstitial cystitis (8 to 19 symptomatic patients in this series met current diagnostic criteria for interstitial cystitis). Slight but significant differences were seen among sites in the bladder but not between 2 and 6-minute distention durations.

TRIGGER POINTS AND INTERSTITIAL CYSTITIS: A CHARLEY HORSE IN THE PELVIS

In over twenty years of clinical experience, we have identified a large number of painful, myofascial trigger points (a charley horse in the pelvis caused by stress) in the internal and external pelvic muscles in patients previously diagnosed with IC. We understand that over time, usually decades, this vicious cycle of chronic anxiety manifests itself by tightening the pelvic floor to a point that it doesn’t untighten and becomes painful and dysfunctional. We understand that where patients feel pain is often not where the pain is originating, a crucial point, as conventional medical treatment often focus on the identified state of pain rather than where the pain is being referred from. The Wise-Anderson Protocol treats both the stress that is what we believe initially causing the pain and directly where the pain is stemming from in the pelvis. 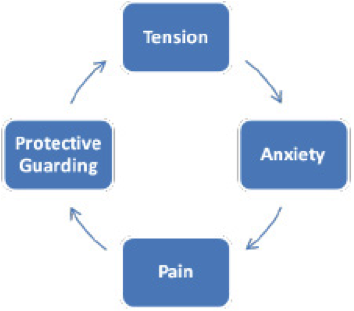 The goal of the Wise-Anderson Protocol is to interrupt the cycle of tension-anxiety-pain- and protective guarding. Quieting anxiety in our protocol is most effectively accomplished by empowering our patients how to help themselves and reduce their pain and related symptoms. The methods for doing this include regular internal and external physiotherapy self-treatment, the regular practice of Extended Paradoxical Relaxation, and the management of negative and anxious thinking that tends to spin off into catastrophic thinking. The Wise-Anderson Protocol has been shown to reduce trigger point/pelvic floor sensitivity and pain from 7.5 out of 10 to 4 out of 10 in 6 months, proving itself as an extremely effective treatment for pelvic pain relief.

Our new, FDA-approved Internal Trigger Point Wand makes self-treatment relatively simple. After evaluation and diagnosis by a physical therapist, our patients are taught how these trigger points can be accessed and manipulated by the patient themselves. We strongly believe that this autonomy in the self-treatment of trigger points is a vital component of empowering our patients out of a sense of helplessness.

We teach the Wise-Anderson Protocol in monthly 6-day immersion clinics held in Santa Rosa, California, for which we offer more detailed information below.

INTERSTITIAL CYSTITIS IS BOTH A LOCAL AND SYSTEMIC DISORDER

Pelvic pain relief — and other forms of pain — from interstitial cystitis, with its often bewildering and troubling cystitis symptoms, is what those seeking help from any treatment are looking for when they go to a doctor. Conventional medical treatment, however, almost universally misunderstands interstitial cystitis. The remedies it offers at best are partial and short-termed and at worst, remedies like surgical intervention or certain injections, can exacerbate the problem.

The fundamental error of conventional treatment for interstitial cystitis is that it does not grasp the fact that it is both a systemic and local problem — systemic in that the nervous system, typically frequently aroused, chronically tightens up the pelvic muscles. It is a local problem in that chronic worry, anxiety and nervous arousal in certain individuals results in the local pain and dysfunction of the pelvic muscles. Without effectively treating both aspects, interstitial cystitis remains.

Our 6-day clinic, offered throughout the year, is devoted to resolving both the local and systemic dimensions of interstitial cystitis by training our patients in the most advanced internal and external physical therapy self-treatment (local treatment), and practicing our relaxation protocol, Extended Paradoxical Relaxation, which is aimed at reducing nervous system arousal daily.

We began treating varieties of pelvic floor dysfunctions in patients at Stanford University in 1995 in conventional office visits. In 2003, we reorganized our treatment in a private practice in the form of a 6-day immersion clinic held in Santa Rosa, California. The clinic, limited to 14 patients and offered throughout the year, has evolved to implement the Wise-Anderson Protocol, a treatment to teach patients to rehabilitate the chronically contracted muscles of the pelvic floor and to reduce anxiety daily. The Wise-Anderson Protocol, done daily at home by patients we have trained in self-treatment, has helped to give many their lives back. The purpose of our self-treatment is to help patients become free from having to seek additional professional help. For over a decade, research has documented our results of training patients with self-treatment for pelvic pain relief.

For questions about cost and eligibility please fill out the form below, email us at [email protected] or contact our office at +1 (707) 874-2225.

For the first time, the Wise-Anderson Protocol can be done at home for qualified persons without attending an immersion clinic.